Yardi Matrix, the leader in commercial real estate data and research, recently compiled an extensive report on the growing state of Coworking in the US.

The report, titled Shared Space: Coworking’s Rising Star, is the first of it’s kind. It quantifies the amount of space by square feet in 20 major American markets. This helps us draw conclusions as to where the industry is headed, and produced surprising new trends.

The report quantifies two ways to define which cities have the most Coworking space available. By the numbers, Manhattan is the runaway leader with 7.7 million square feet of space. Los Angeles is a distant second with 3.7 million.

Roughly 1.4 million square feet of space in Miami is now Coworking, and that number is rising quickly as the biggest name in the industry, WeWork, just opened its 5th Miami location, branching out well beyond the downtown metro area.

It’s also important to note that the study only encompassed buildings with 50,000 or more square feet. Smaller buildings surely have more Coworking spaces in all of these cities included in the report, but it would have been a monumental task to even begin to dig into tiny locations throughout the nation. 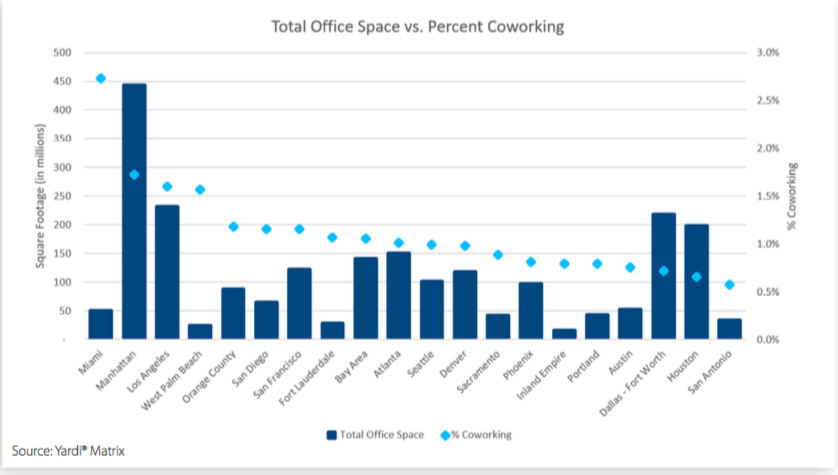 To me, this is one of the most unique aspects to this Yardi Matrix report. As evidenced in the chart below, lower vacancy rates make it harder to find office space, and drives pricing up. These factors make Coworking a viable option to many people who previously weren’t in the industry.

Clearly Miami stands out as a huge outlier. A relatively average vacancy rate compared to the other cities in the study, but by far the biggest percentage of Coworking as we discussed earlier.

This also illustrates how massive Manhattan’s lead is on every other city in terms of sheer volume, aided by one of the lowest, if not the lowest, vacancy rate in the study.

Another trend the study uncovered was the relationship between Coworking in urban versus suburban areas. As a whole, urban Coworking represents 1.4% of office space, larger than the 0.9% of suburban space.

This is greatly due to factors such as walkable commutes and accessibility to amenities. Coworkers are much less likely to drive a long distance to a shared space, and those who do live in the suburban areas, would rather be where the masses are for the most part.

Miami is the leader in % of Coworking spaces in Urban areas (3.5%) as well as in suburban areas (2.2%). The biggest disparity came in cities such as San Francisco and Austin. SF has 1.6% Coworking in urban locations, and Austin was the second highest urban percentage (1.9%). These two cities tied for the smallest suburban Coworking percentage, at 0.4%.

Naturally, one city was not included in this part of the study, as you’d be hard pressed to find anything resembling suburbia in Manhattan.

While there are countless small spaces that just did not meet the criteria of this publication, the study provides incredible detail into the growth of the Coworking industry and the trends for the coming years.

Operators should not look at the WeWork model for sustainability. Most Coworking spaces involve small locations. WeWork’s model is very large scale and is not indicative of how the vast majority of spaces will function.

The competition is heavy with many new players joining the field consistently. Just a decade ago there was an estimated 40,000 square feet of Coworking space available in the US. Now there is nearly 700 (!!!) times more than that.

Yardi Kube is proud to be the platform of choice for many of the biggest names in the industry, from Premier Business Centers to Pacific Workplaces. Yardi Kube provides them and many other booming Coworking sites with all the tools needed to thrive and grow, as well as facilitate the most intricate tasks an operator faces.

To download the full report, please click the link below. And to find out how Yardi Kube can help propel your space to new heights, click here for more information.