There’s a growing trend that’s breaking the mold of some male-dominant spaces. All-women coworking spaces are taking off and are catering to a highly untapped sector of the shared office space industry.

Picture a coworking space in a hip, urban sector of a big city. It’s easy to envision young male professionals bonding over a ping-pong table or a fridge stocked with beer.

Take that image and flip it to a ‘boutique’ style space, featuring yoga classes, pink couches, and bookshelves dedicated to female authors. 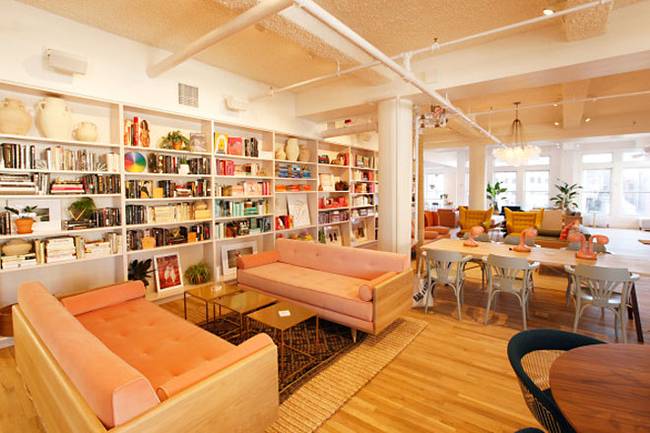 One of the most successful spaces thus far is The Wing, which opened in October of 2016. As per a feature in Entrepreneur, The Wing had a waiting list for membership over 3,000 as of summer 2017, and currently operates spaces in the Flatiron district of NYC as well as SOHO. Their D.C. and Brooklyn locations are scheduled to open in the coming months.

Locations trying to emulate the success of The Wing are popping up throughout the country, and internationally. St.Louis, Phoenix, Los Angeles, Washington D.C, Toronto and even Stockholm, Sweden are already home to established all-women coworking spaces.

But does the cost of membership prevent many female entrepreneurs from joining? The Wing offers plans starting at $215 a month with an annual commitment, but other spaces have seen prices for their top memberships soar over $500 a month.

The benefits can be worth the price, however. The Wing offers more than workspaces and Wi-Fi common to all shared spaces. Women who join their space have access to breastfeeding areas, female speakers/events, and showers, among other perks at The Wing.

Paper Dolls, in Los Angeles, has planned locations throughout California, NYC, Seattle, Chicago, and Atlanta. Some of their locations even offer complimentary styling for VIP members. It’s all in the name of empowering women to break through in what has long been considered a male driven industry.

Whether it’s a typical coworking location or one of these all-women spaces, coworking is built on a sense of community and the feeling of cohesion and inclusiveness that it creates for its members. That can be especially true and necessary for women.

Hera Hub, which has expanded to six locations, is the space referenced earlier in Stockholm. Felena Hanson opened Hera Hub specifically to give women a comfort level impossible to achieve at male-dominant coworking locations.

These spaces encourage women to be open and form relationships with fellow members who will understand and be supportive of their needs. Yes, they provide some superficial helpful concepts such as a workshop on floral arrangements, but it goes beyond that.

They also delve deeper and help women with more serious concepts. The Wing offers seminars on depression and anxiety. Rise, in St.Louis, created a mentorship program which allows teenage women to meet with members and shadow them to learn from successful adults who they can emulate.

It’s benefits such as these that go beyond just providing the basic amenities in coworking.

While there are plenty of spaces that equally divide membership among men and women, and provide ample opportunity for a community feel among all, it is undoubtedly the minority in coworking. So with the rise of all-women spaces, it’s not hard to see that further narrowing and specialization is in store.

Coworking spaces that offer childcare are already thriving. All-male spaces are actually offered as well. We will see certain needs and demographics will be narrowed down and targeted, given the popularity and demand that all-women locations have created. There is a social media revolution which has unlimited potential to reach women of all ages, incomes, and lifestyles.

Even though many cities are already tapped into with all-women coworking, there are large cities that either have not been reached, or cities big enough to support multiple thriving locations, given how some spaces have large waiting lists.

Even more powerful than the community formed in all-female spaces could be the potential for multiple locations to piggyback off eachother and work in cohesion. Yardi Kube can power these spaces and be the driving force behind another breakthrough in coworking. See how by clicking below.